MENUMENU
Advanpure • News • Knowledge • Buying a Diesel Vehicle in 2022, is it still worth it? 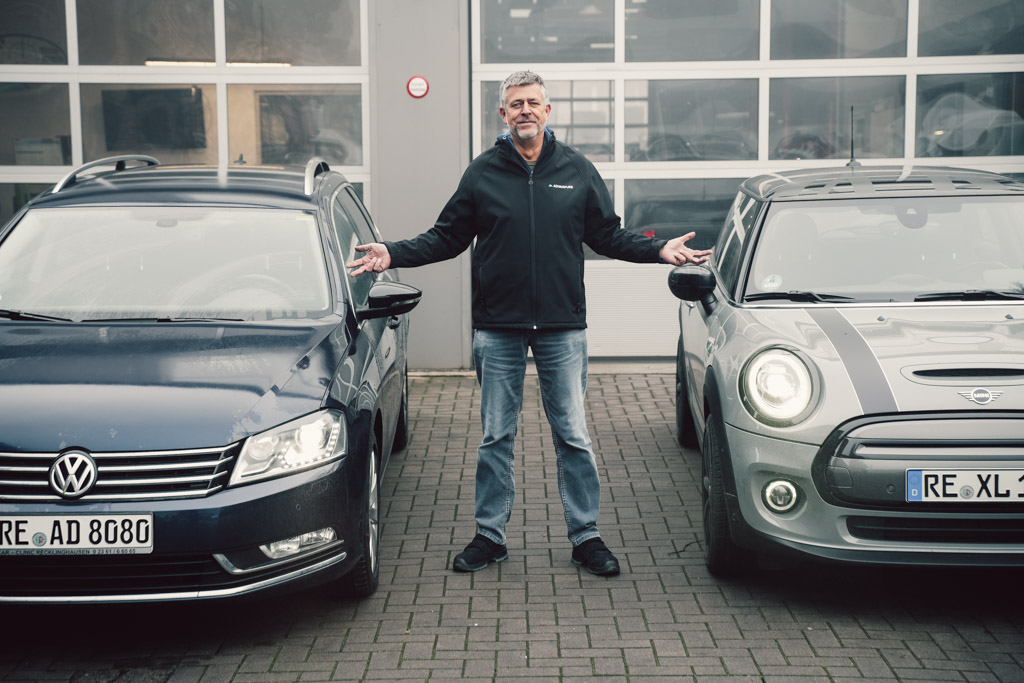 Subsidies, driving bans, range or emission standards! Anyone who deals with combustion engines quickly realises: the discussions are becoming increasingly heated! Diesel engines, which have been so highly valued for decades, have come under fire, which is why many consumers are asking themselves: Is it worth buying a diesel today or should one rather refrain from doing so because of driving bans and the like?

The fact is: In times of electromobility, many are rethinking their attitude and deciding against the self-igniter. Despite the criticism and undisputed disadvantages: Diesel continues to generate a multitude of advantages.

In the following article, we take a closer look at the topic and reveal whether the purchase is worthwhile – and what the advantages and disadvantages are. In addition, you will learn which questions you need to ask yourself as a customer and for which professional/person groups the formerly highly popular combustion engine is particularly worthwhile.

Buying a Diesel: Does it still make sense at all?

In recent years, we have heard more and more about driving bans, which is why many diesel drivers and potential buyers are worried. “Does buying a diesel vehicle still make sense at all?” can be answered in a few words. Yes, and that as a new as well as a used car.

However, it is also a fact that manufacturers such as Porsche, Toyota or Volvo have removed diesel vehicles from their portfolios. The consequence: many companies no longer believe in the self-igniters and neglect them.

Nevertheless, there is the other side that continues to believe in the future of diesel. And rightly so, after all, the demand continues to be great.

Basically, there is no need to fear for the diesel future, even though the media suggest this. However, it cannot be denied that the market share is declining – especially in terms of new registrations.

In 2020, the share was still around 28 per cent – which was still absolutely fine. But it is also a fact that the pandemic has scared off potential buyers. This aspect should not go unmentioned, after all, many consumers have lost their jobs or have fears about the future – which puts the actually determined decision to buy on hold.

For quite a few people, the crisis, the lockdown and its consequences have led to a change in thinking. Instead of constantly driving the latest and greatest, many prefer to use the previous vehicle and think more about sustainability.

All these aspects have influenced sales, and significantly so – at least that is what the sales figures for the first three quarters of 2021 indicate. Thus, the share was only 21.1 per cent, which corresponds to a decline of almost seven per cent.

Apart from the pandemic, there are of course other reasons – for example, the smaller range of models on offer. After all, around 20 different models have been discontinued in the last six years and are no longer available as diesel variants.

In addition, many are put off by the loss in value that many experts see for the coming years. Whether this will be confirmed, however, remains to be seen and is anything but certain.

Buying a Diesel: The advantages

The trend is still downwards, but this is where the opportunity lies for consumers like you. The fact is that the diesel crisis brings a host of advantages for potential buyers.

Thus, prices are at a much lower level compared to previous years. To this end, many manufacturers offer an exchange premium if you exchange an older diesel vehicle for a Euro 6-compliant model.

As far as the other advantages are concerned, diesel vehicles all score points with low fuel consumption and, in addition, the comparatively low fuel price – which is a weighty argument in favour of the purchase in view of the already strongly rising prices.

We have listed the other advantages in more detail below:

Many wonder whether diesel or petrol is the better choice. Compared to petrol engines, diesel engines have many advantages. There are also a number of advantages over e-cars that speak in favour of the diesel engine despite the hype – such as the greater range or the proven technology.

In addition, and despite the criticism, this is a decisive argument for many diesel drivers: the sound of the engines, which trigger excitement and bring a smile to the driver’s face.

Buying a diesel: The arguments against the diesel engine

But and this cannot be dismissed: Buying a diesel is also associated with disadvantages. Apart from the diesel scandal, the diesel engine is not worthwhile for everyone. Those who only drive a little and buy diesel because of the lower fuel price will not get their money’s worth.

The reason is the higher purchase price and the considerably higher motor vehicle tax that accrues year after year. In addition, there are the possible driving bans for vehicles up to EURO 5.

These can often be retrofitted with the hardware and software updates are also available – but the costs are not reimbursed by all manufacturers.

When is a diesel worthwhile?

The diesel is especially worthwhile for frequent drivers. On the other hand, if you travel a lot in the city, it is indeed better to look around for alternatives. In general, the focus of potential diesel buyers is on larger vehicles.

Small cars, on the other hand, are nowhere near as popular. So provided you drive a lot of longer distances and achieve more than 20,000 kilometres a year on the speedometer, buying a diesel is a thoroughly worthwhile proposition.

An important topic, and one that many people do not know about, is the subsidy for hardware retrofitting – which consumers can claim for EURO 5 diesel.

In this way, you secure a diesel vehicle for the future and escape the threat of driving bans – which in practice, however, also only exist in four German cities.

Funding varies and depends on the model as well as the federal state. In the best case, you upgrade your diesel after you buy it, can also drive in low emission zones and benefit from government subsidy programmes on top of that.

This will at least mitigate the high hardware conversion costs for the EURO 5 models.

When it comes to the question: diesel or petrol, the costs for the hardware retrofit are a significant factor.

Weighing up the pros and cons, the decision for or against a diesel will vary from consumer to consumer. If one takes a comparison, draws pros & cons together, an interesting overall picture emerges.

The fact is that electric cars are much more expensive to buy. It is only through subsidies that electrically powered vehicles are competitive and represent an alternative at all. Although the market share of internal combustion engines and especially diesel is shrinking, the advantages remain.

Consequently, if you are thinking about buying one, consider the lower fuel consumption and fuel prices. The latter in particular is an aspect that also sets the diesel apart from the petrol engine – after all, the differences per litre price are 20 cents and more.

Far from the artificially generated advantages of electric mobility that have been suggested by the media for years, objectively speaking there is not too much to be said for an e-car.

In comparison with petrol engines, the consumption and fuel prices speak in favour of diesel, while the environmental factor speaks against a purchase – even though the CO2 emissions are lower.

Soberly considered, the new car price, the motor vehicle tax as well as the insurance premiums are lower for petrol variants. Thus, the diesel decides the

Comparison only if you have a corresponding need.

Diesel or petrol: For these people/occupational groups, buying a diesel is particularly worthwhile

Due to the improved environmental compatibility according to the EU directive, diesel continues to be a worthwhile proposition – even if not for everyone. There are people or occupational groups for whom diesel is particularly attractive.

The decisive factor is the application scenario. If you drive 400 kilometres or more day after day, you won’t bother with an electric car or a petrol car.

Consequently, it is precisely occupational groups that benefit from a diesel, who need high ranges and are on the road a great deal in the car. The same applies to companies that are on the move in transport.

Otherwise, diesel vehicles are very popular among craftsmen. Landscapers, roofers, facade builders and horse farmers in particular are more likely to use diesel because of its advantages. The same applies to field workers who travel many short distances to customers or are on the motorway a lot.

But in the private sector, too, there is often no way around diesel. Especially for families who do not have a second car, the diesel is still the vehicle that comes with the fewest compromises. Holiday with an electric vehicle, preferably with a caravan? Impossible. Holiday with a petrol engine? Expensive. The diesel remains the only alternative for the holiday.

The bottom line: many aspects speak in favour of buying a diesel engine

If you are thinking between diesel or petrol, you should consider all factors. The same applies to the comparison between the diesel engine and an electric car.

The question of whether a diesel car is still worthwhile in today’s times can definitely be answered with a yes. However, it is also a fact that the purchase decision is a complex matter and cannot be clarified overnight.

There is no doubt that not everything is optimal with the internal combustion engine, and the past few years have not put the diesel in a good light. The image has suffered as a result of the crises, the market share has shrunk and some manufacturers are now doing without diesel vehicles.

If one disregards the threat of driving bans – this fear is unfounded due to the developments of recent years – there is not much to be said against buying a diesel.

The greater range, the price discount and the exchange premium when buying a new car or the lower fuel price compared to diesel are facts – which simply cannot be dismissed. There are also no planned driving bans for EURO 6 cars and even for EURO 5 models there is the option of retrofitting.

Whether electromobility will ever displace combustion engines remains to be seen and seems questionable. The fact is that the market share of combustion engines is 97 percent. In any case, it will take some time before the share of e-cars grows significantly.

Moreover, absolutely no one can accurately predict whether alternatives such as hydrogen will not come into focus in the near future – or whether other cost-effective solutions will be developed that are environmentally friendly and enable equivalent mobility.

Conclusion: Diesel is anything but finished

Ultimately, it remains to be said that diesel still has a future and – contrary to the opinion of many – is anything but finished. The advantages over electric and petrol engines are undisputed, so they cannot be dismissed out of hand.

With 15 to 20 percent less fuel consumption than their combustion engine rivals, diesel vehicles are more efficient, and the price per litre of fuel is also a strong argument. For certain groups of people and frequent drivers – who easily exceed the annual mileage of 20,000 kilometres – the diesel is still recommendable – despite the higher purchase price and the vehicle tax, which is significantly more expensive.

So if you have the appropriate need and consider the advantages from our article, you can buy a diesel in any case. Last but not least – as the pros and cons have clearly shown – despite the undisputed disadvantages, there are several reasons for buying a diesel.

Are you an individual or a company?

Do you have trouble completing this form or have questions?

Give us a call! Our team will be happy to help.